So, I have a Samsung smartphone. And I'm learning Korean. This means I tend to watch shows like Gag Concert and Running Man, Safety First and the Korean Home Shopping Channel (I stream Korean tv on my phone and tablet) as well as the occasional drama (I'm not that big on K-Drama but it is nice). I have seen several times that phones would, instead of make the sharp beep that Samsung phones make here in the US, say "밥주세요!!" Which basically means "Please feed me!" (I'd go into literal translations/meanings and explanations but I really don't feel like it. Korean is language #5 for me, I really don't feel like going into linguistics, I want to talk tech).

I was so stricken by its cuteness that I wanted it for my phone as well. Good thing I know a thing or two about phones. I originally tried out Android by hacking/programming my first smartphone (which was a Windows' Tilt 2) to become a double OS to run Froyo (2.1).

I figured the easy part would be the hacking of the phone but the hard part would be to find the actual sound file. I looked endlessly for it in both Korean and English until I asked one of my Korean friends about it and they directed me to a page I couldn't possibly come across on my own. Now, the file was a .wav but to work for smartphones nowadays, .ogg is what's needed. So I had it converted using this site. Alright, I got everything secured. Time to work on the phone.

First, on many sites I was told to go into the system/media/audio/ui and boom, I'd find it. However, I made the mistake and from file explorer on the phone (which is technicially "systems" but in a different way, it's more like "storage"), I went to media/audio and instead of finding "ui", I saw "notifications" instead, which just led me to my FB messenger notification pop. I knew I had to go deeper. That means time to root.

Yep, you can't change the internal system without rooting the device. Otherwise it will be hidden from you because the data is supposed to be hardcoded into the system, this is not simply changing the text message or phone ringtone, it's more than that.

Also, rooting requires some research because there is no catch-all root. You have to find a root for your phone and most specifically, your model because unless you have an unlocked phone, you need to unlock the bootloader. Think of the phone's internal system like a multiplex house and the bootloader as the door. Now, I have a Note 3 from T-Mobile (first time in a long time that I bought a phone from a provider, I tend to buy them unlocked from a seller and mess with them. This mean I could avoid the annoying bloatware I despise so much. This time, since I got the phone from a provider, there's bloatware (programs the phone came with such as Netflix, Galaxy Plus and others I don't use but can't get rid of easily.)) and that's a SM-N900T. Upon research, it appears there wasn't really much in the way of a locked bootloader for this phone (I probably would be saying something different if I got the phone through Verizon or AT&T so I can go straight for rooting it). I decided to go with Kingo Root because it had a version for my phone, also it was strongly suggested by I think Phandroid, a site I'm on a lot.

I haven't rooted before because this isn't exactly something to be so careless about. If you're not careful, you could brick your phone (turn it useless, may as well be an occasionally glowing paperweight). Rooting is tampering with the phone's internal system (and voiding the warranty so if your phone screws up, it's all on you). I really wanted this little notification so I took the chance and opportunity. Also, back up your work and files, you could lose it all. (I took out my sd card as well). Before I began, I went to Settings>General>About Device. Hit the back button 7 times (you should see a little message saying "You're [#] times from being a developer!" blipping up) and when you do, in General, between Security and About Device, should be Developer Options. Rad, right? Inside, check "USB Debugging" so there won't be any issue with rooting.

So, I went with Kingo Root and followed the directions they had exactly on their site. Thankfully, I followed everything to the letter and it all turned out well. I didn't even lose any files. Everything was perfect. Now onwards and forwards with modding the phone. (Also, as I waited, I touched up the phone case so now it has more glow-in-the-dark effect than ever before).

I got Root Browser, granted it root access and from there I found two System folders. The one I really wanted was the one with the computer monitor in front of the folder. That was the internal system, the other is to the Storage (which is where I first started and found the FB pop sound instead). So I followed the System/media/audio/ui and bang, found the LowBattery.ogg sound I was ready to get rid of. I already prepped the other soundfile, the one I wanted to use, in the notification file, next to the FB pop, so I could find and copy it easily. I'm selecting Copy because I learned that Move doesn't work, it only produces an error and fails, which isn't good. So I copy the file and plink it down in the UI folder but before I do anything else, I snap a picture of the original file name so the phone know what to look for and in case something happened with the phone, I had a snapshot taken from an outside source as my guide 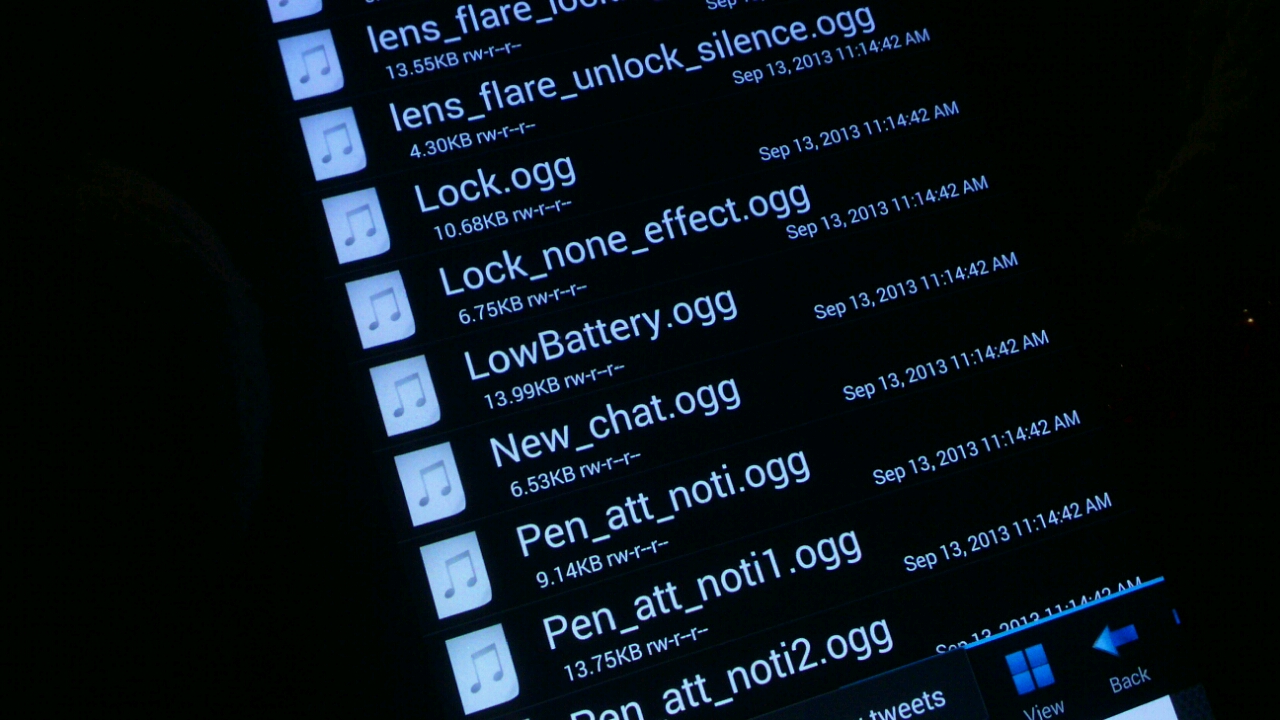 Without it, I could make a mistake as simple as naming it LowBatt.ogg and the phone won't be able to find it because it was instructed/programmed to look for a "LowBattery.ogg", no exceptions. So I deleted the old file (which you see above, judging from the date) and replaced it with the new, cuter file. It replaced effortlessly...or so I thought.

When I ran down the battery (which was a harder task than I thought, took hours) and finally got to the point where it should say the low battery warning. I heard silence. Nothing but silence. The phone glowed, showed the "low battery/please connect charger" message and did everything else it does normal but no beeping noise, no cute noise, nothing but silence. So I got by accident the thing a lot of people want XD I got rid of the annoying, infernal beep.

However, this isn't what I wanted, I wanted something adorable, not silence. Sometimes, by yelling at me, it's all I have to know that I need to get to a charger, stat. At least it's cuter and doesn't make me want to throw it when the charger doesn't successfully connect the first time around and thus makes the noise again.

What happened was the permissions were vastly different from everyone else. My file said it was "rwxrwx---" when everything else said "rw-r--r--". Upon searching, I found on XDA Developers, that I needed to mess with the file permissions to convert it. So I did. 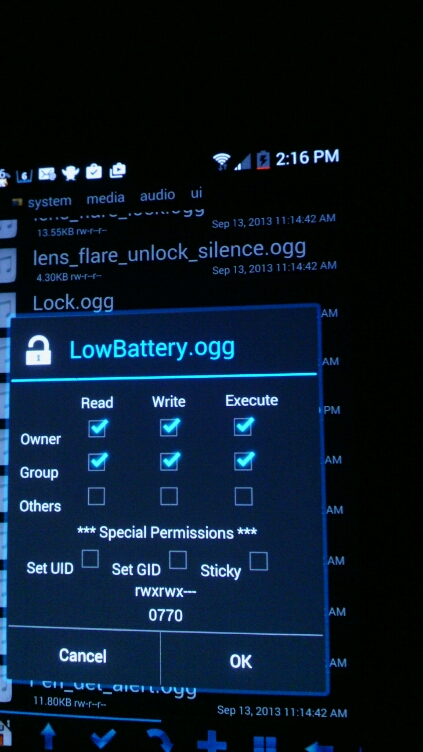 I didn't mess with the special permissions because they didn't need to be bothered. However, I did correctly select the proper properties and fixed it all. (Remember: R (Read), W (Write), X (Execute)) and it's read across like a straight line from Owner to Group to Others. So I guess if someone wanted to make the LowBatt beep stop, just fiddle with the permissions to what I had above?

So after doing this and testing the battery by plugging in and taking out the charger, it was a success! Now my phone tells me that it's hungry instead of beeping harshly at me. I'm so happy.